The White Lotus Season 2 in Sicily: the filming locations 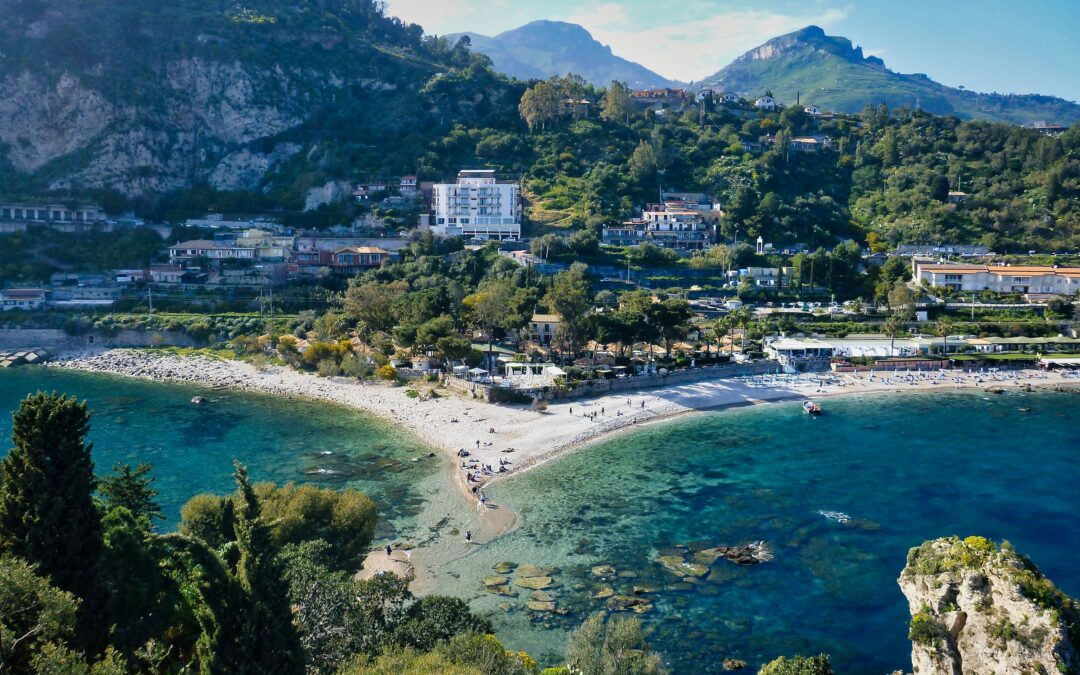 Have you heard of the White Lotus? Or maybe you have just finished watching the Season 2 shot in Sicily, Italy. You might be wondering where is the White Lotus filmed? This series was a blast and the Google searches on Sicily are rising in the US and the UK as we speak. So I am excited to build up on this success and show you the places where the White Lotus Season 2 was filmed in Sicily.

We will discover Taormina, the Pearl of the Mediterranean, Mount Etna (the volcano!), the Baroque town of Noto, Palermo the capital of Sicily. Finally, we will talk about the super luxurious hotel where the White Lotus is set. I’m talking about the Four Seasons San Domenico Palace in Taormina.

If you have not watched the episodes yet, I hope you’ll do that as the White Lotus in Sicily is an intro our island and great inspiration for your next holidays. If you have watched it already, let me revive those emotions about this absolutely stunning production!

In the White Lotus episodes, some of the most beautiful places in Sicily are the scenes where the protagonists act in the midst of natural beauty, culture and mystery.

Two young couples from California decide to go on holiday to Sicily, as well as a family from Los Angeles and a middle-aged couple from San Francisco. They will all find themselves mingling with the local people, connecting with each other and eventually facing a crime scene. You could have no idea how it would end.

In a nutshell, the White Lotus 2 is a perfect blend of love, thrill, sex, cheating, conspiracies and murders. All of that, with a great Italian Dolce Vita touch represented by some very sexy locations in Sicily. Places that seduce the mind and the senses. Now we can review them all and see whether you feel inspired to go.

In our ebook travel guides about Sicily we cover all of the locations shot in The White Lotus Season 2, including:

#1 Discover Taormina, the pearl of the Mediterranean

Taormina was a Greek settlement and since the time of the Grand Tour it is a popular tourist destination. This resort town gets the lion share in the White Lotus as it is the place where the American travelers stay in Sicily. It is special for its narrow streets and beautiful buildings, including the Greek Theater—an open-air theater built into a cliff face overlooking the sea ad Mount Etna.

The town is a popular destination for American visitors, British, French and German who want to experience the beauty of Sicily without the mess of crowded cities. Many restaurants, bars and shops in the movie are actually located along the chic Corso Umberto, the main pedestrian street. Here you will find an excellent selection of restaurants serving traditional Italian cuisine, including delicious Sicilian dishes and seafood. There are also great gelato shops where you can enjoy fresh fruit flavors like fig, pistachio, blackberry (at the Taormina Bam Bar).

Taormina is also home to several beaches nearby where you can enjoy an afternoon swim or relax under the sun. Here you can see people swimming on hot Summer days, or maybe sunbathing in Winter days.

From the village of Taormina the view over Mount Etna is just breathtaking. It might well be one of the most beautiful landscapes of the world. Not surprising then that this town is the set of a holiday series where wealthy Americans like to go to.

Isola Bella beach is the famous beach in Taormina. This is a stony beach with a “Beautiful Island”, literally, located at the center of the bay. The bay of Giardini-Naxos is also worth discovering, this is where the two Californian friends go for a fun day with jet skis in Taormina.

#2 Cefalù, the beach set of the White Lotus

In the movie, the sandy beach of the White Lotus Hotel in Sicily is not in Taormina. The reality is that the Director Mark White has decided to move the set on the North Coast of Sicily to Cefalù. This beach is where Episode 1 starts, and where in Episode 7 the series ends with a murder scene. The beach is just in front of the town of Cefalù, with the iconic Norman Cathedral and the houses that almost have their foundations in the water.

#3 Noto, the baroque town of the “girls night”

I don’t want to be a spoiler, this is why I won’t say too much on the plot. However, the two girl friends go for a night without their boyfriends to a luxurious Villa in Noto. This villa features majestic frescos on its walls, which also inspired the frescos used in the opening credits of the series. These frescos vary from rural Sicily to more neo-classic settings. Simply put, every taste will find a match here.

In real life, this villa is Villa Tasca, near Palermo. But let’s give the director the right to play with Sicilian villas for the purpose of making a stunning White Lotus 2 in Sicily.

Noto is a vibrant baroque town which resuscitated after the catastrophic earthquake of 1693. Since the style on the rise at that age under the Spanish-ruled Sicily was the late Baroque, the town shows off today its distinguishing, stylish, baroque signature.

#4 Palermo, the capital where Tanya (Jennifer Coolidge) is invited for a lavish party

At some point, a lavish villa party is organized in Palermo for some of the White Lotus guests. In reality, this villa is also in Noto. Its name is Villa Elena. It dates back the 17th century and it recalls the style of a Roman Villa.

The reaction of Tanya (Jennifer Coolidge) when arriving at the villa together with her assistant Portia (Haley Lu Richardson) is: “Oh, my God. Are you kidding me? Look at that pool”. Indeed the outdoor pool is in front of the façade of the villa, in a style like only the Romans could have built it.

Palermo is Italy street food capital! Not by coincidence here Portia goes with her date around the lively streets of the Palermo Opera Theater at night to taste the famous Arancini, a Sicilian rice ball with ragù sauce inside. At the same time Tanya is enjoying a Madama Butterfly Opera performance. Here again, the theater in the movie is in Palermo, while in reality it is the Teatro Massimo in Catania. But let’s forgive this to Mark too!

Mount Etna is the highest active volcano in Europe, with an elevation of over 10,900 feet (ca. 3330 meters). Dominating the East Coast of Sicily, its eruptions take place since human kind has started tracking history (in the final episode, Etna erupts magnificently).

Beyond the many beautiful views of Etna from Taormina that you will see in the seven episodes, the White Lotus crew visited Mount Etna to shoot some scenes of a Wine Tasting Experience at the Planeta Sciaranuova Estate.

Guess what? Well before the White Lotus, we selected the Planeta Winery as our recommended provider for Wine Tastings in Sicily and around Mount Etna. This is one of our exclusive travel ideas we provide with our Sicily Guide Books, and that you should check out!

Let me say that I was flattered to see that Time for Sicily experience providers recommendations match with the ones of the famous HBO series directed by Mark White.

Now back to the details of the series for the hospitality addicts. Which hotel is the White Lotus Sicily Hotel in Taormina? The series indeed shoots in the Four Seasons San Domenico Palace. This Sicily luxury resort in Taormina is a five-star hotel that offers luxury accommodation at the foot of Mount Etna.

The hotel was awarded the 2018 TripAdvisor Travellers’ Choice Award for Luxury Hotels in Sicily and with its renovation it was ready for the White Lotus 2 shooting in Sicily. Indeed, the hotel was beautifully restored to its former glory as an ancient monastery, and transformed into a luxurious hotel. The rooms are set within the old monks’ quarters and have breathtaking views of Mount Etna, the tallest active volcano in Europe.

Another moment of glory for this hotel was the G7 meeting in Italy, which took place in Taormina in 2017. You might have seen the video of head of States admiring the Italian air force acrobatic team flying over the terrace of the San Domenico Sicily Palace, the White Lotus Four Season hotel in Taormina.

I hope that by going through the key places where the White Lotus 2 was filmed in Sicily, you could be able to, at least virtually, enjoy the beach in Taormina, the fascination of Mount Etna or the luxurious villas of Noto and Palermo. As summer is approaching, think it through and treat yourself with your White Lotus vacation in Sicily this summer.

Sicily’s capital city is Palermo, which also serves as its largest urban area with over 1 million residents. The island was once home to many different civilizations, including Greeks and Romans. Today, it’s known for its rich history, stunning beaches and delicious food. Discover more about Sicily with us at Time for Sicily.

Should you like the article on the White Lotus Sicily location, read more on our blog. Should you be a demanding traveler like the characters of the series, contact us for an exclusive customized travel plan Sicily.

Get ready for a great new adventure, full of beautiful landscapes, delicious food and lots of fun on www.timeforsicily.com! Follow us on social media to keep up to date with the latest news about Sicily. And watch the White Lotus Season 2!

Till the next movie blast, we will keep sharing our love for Sicily.
.