MOUNT ETNA, THE HOUSE OF GODS 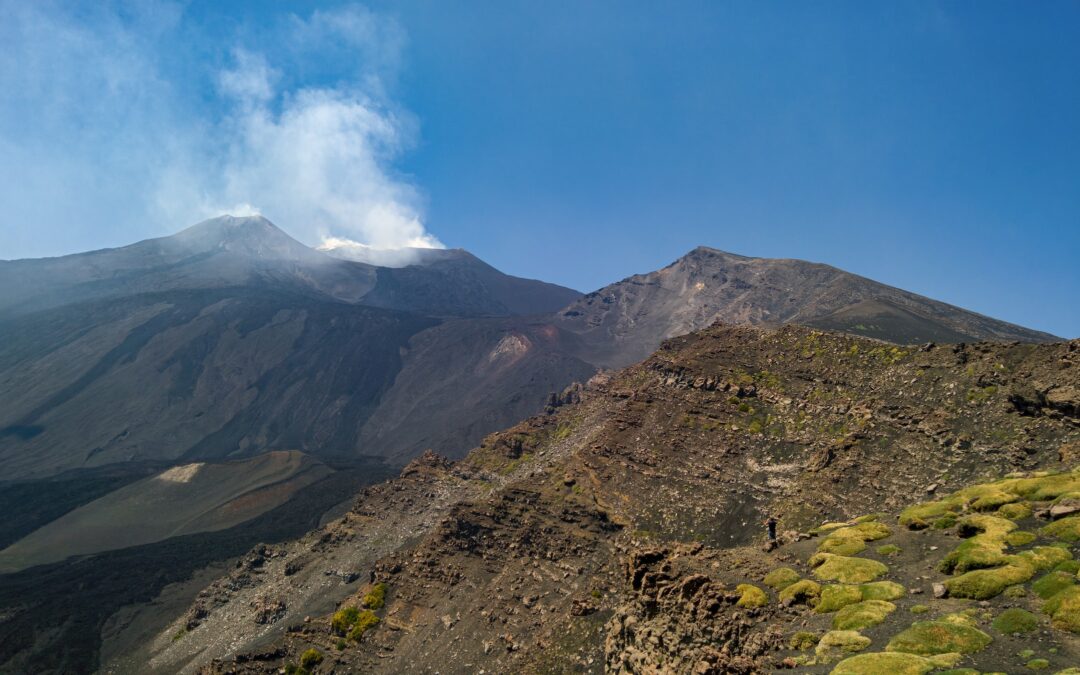 We are delighted to announce the privilege to be featured in the October issue of the Mediterranean Lifestyle Magazine – TML – with the following article. Our suggestions from Mount Etna and possible experiences selected by the Time for Sicily team.

On a sunny and warm Saturday of October we decided to give ourselves a treat with a Mediterranean experience that only a few selected people can have. And it’s not about money. When it comes to a day on an active volcano in the heart of the Mediterranean, there are no many places offering that other than the island of Sicily.

Mount Etna is the highest active volcano in Europe, reaching the altitude of ca. 3’357m above sea level. An astonishing altitude if we consider that we are 1’500 kilometers away from the alpine region of Europe, where normally only its highest peaks reach this remarkable height. In winter, Etna covers itself up with a deep layer of snow, allowing the local people in Sicily and the most curious tourists to ski or do snowboard on its soft Mediterranean snow. The landscape is breath-taking. Imagine a mountain as high as the Alps, where you gently ski down by looking at the deep, blue Ionian Sea under your feet. And often times the volcano erupts, drawing spectacular lava fountains at its top or artistically-shaped lava flows on its flanks. With all those rare geographical manifestation of Nature, no wonder if Etna used to be considered as the home of the god Hephaestus or Vulcan by the ancient Greeks and Romans respectively. However, the real identity of Mount Etna is the one of a relatively young active volcano, which was born approximately 570’000 years very close to the junction between the African and the Eurasian plates. To give you a better idea, the latitude of Etna is such that we could draw a horizontal line on the map connecting Cartagena in Spain, the Northern coast of Tunisia and Athens in Greece.

Back to our Saturday treat, we embarked on an excursion to feel the soul of the volcano from an altitude of 2’700m a.s.l. We first met Claudio from EtnaWay.com, a South Tyrolean-born and Sicilian-raised mountain lover who has decided to make Mount Etna a reason for life. With him we started ascending at around 1’900m a.s.l. without resisting in pointing out the features the various endemic plants growing on the volcanic soil of Etna. Among this, we found a particularly interesting one, the Rumex Aetnensis. It grows from Spring to Autumn fighting against the drought of these seasons by retaining a substantial amount of water inside its tank-shaped leaves. In essence, should you ever run out of water on Mount Etna, Nature offers a solution to survive in the last mile of your hike!

When we started feeling the heat and the altitude, we stopped at a scary but at the same time amazing place. We were on the edge of a side crater, which was active not too long ago and still emitting some hot smoke from its central rocks. The heat coming out of the rocks was impressive, so we kept careful and we did not stay too long with our hands on it.

At some point during the hike though, hunger started kicking in. Claudio made sure that around lunchtime we could reach a panoramic spot between 2’500 and 2’700m a.s.l. Why this spot? Unexpectedly, we found ourselves on the edge of a large depression, called the Bove Valley. Around 10’000 years ago the Eastern flank of the volcano collapsed into the sea, leaving this huge scar in the mountain profile which however provides a breath-taking view over the Ionian Sea. That’s exactly on the edge of this valley that we stopped for our sandwich lunch with view.

During lunch, Claudio mentioned that Etna is capable of surprising not only with large sky and sea views, but there was still something unique to be discovered about the volcano before calling the day. On the way back we saw a hole in the lava rock. Indeed, we had come to admire a lava flow cave. It is a relatively recent volcanic geological formation, resulting from a lava flow cooling down below 800 degrees Celsius. While the outer part solidifies, the inner lava keeps flowing until all of it is expelled out from the solidified external layers, thus leaving an empty tunnel inside. Hence, we took our chance to walk along the lava flow cave with lamps until the cave became too narrow for walking. We noticed that some years before a 30 cm-large piece of roof had collapsed, creating a so-called Skylight. A hole from which the sunlight can enter and create a very nice connection between the external world and the underground world dominated, as the Romans said, by the god Vulcan.

Once down to 1’900m a.s.l. after our very exciting excursion on the volcano, we decided not to head back to town before we could say that we had fully experienced Etna. What was still missing was a glass of wine produced on the gentle flanks of Mount Etna. For this, we drove to the Planeta Sciaranuova Estate, on the Northern flank. Once there, the first view over the Estate was magnificent. The green vineyards were surrounded by the black color of the lava flows or the lava-brick walls sub-dividing the fields [watch the video]. The soil is incredibly fertile here and it transfers that richness of elements into the taste of the typical Etna wines, we were told by the Estate manager. Here at sunset, we tasted wines – including the rising star, Etna Rosso – and EVOOs produced on the volcano together with different types of local cheese. This moment we will always remember. A Mediterranean sunset apéro on Mount Etna, definitely not to be missed by our readers when visiting Eastern Sicily.

Special thanks also to Etnaway.com and Planeta Wineries for their support and their exclusive, unique experiences.

At Time for Sicily we have shaped an eBook Travel Guide Sicily that is concise, interactive, media-enriched to help you plan your holiday in Sicily as well as guide you on site with actionable travel itineraries and direct integration of tested third-party providers links (including a selection of hotels and restaurants!). To see how fun we have made for you to organize your summer holidays, check out Sicily travel guide pdf. There you can choose among all the Sicily travel ideas that match your preferences and desires. Inside, you will also find an interactive Map of Sicily where you can click on the suggested locations and in the blink of an eye see some pictures to inspire you. If you liked it, you can customize your own tour including that additional stop.

Are you instead a meticulous traveler who, beyond our Sicily guide book likes getting in touch with a travel consultant in Sicily over the phone? Maybe you want to surprise your partner with exclusive travel ideas in Sicily? Or do you want to organize your perfect Sicily family holidays? Then contact us via email or via our Sicily trip planner for a free consultation or a fully-fledged Sicily customized travel plan.

Interested in our content? If so, visit our Sicily travel blog for more and share our travel ideas with your friends. We would like to wish you good Easter holidays in Sicily 2022. After all, it’s always Time for Sicily!